I suspect Paul combined this call for the Body’s unity with an acknowledgement of the Body’s diversity because he knew that unity isn’t the same as uniformity.

We’re not called to be alike; we’re called to love.

We’re not even called to get along all the time; we’re called to love each other as brothers and sisters, as people united in one baptism, one communion, one adoption.

Maybe we need these differences to be animated, to be alive, to mature. Maybe friction isn’t a sign of decay, but of growth.

The world is certainly watching. But this doesn’t mean we hide our dirty laundry, slap on mechanical smiles, and gloss over all the injustices and abuses, conflicts and disagreements, diversity and denominationalism present within the Church;  it means we expose them. It means we talk about them boldly and with integrity, with passion and with love. I suspect that talking about our differences is better for our witness than suppressing them, and I’m sure that exposing corruption and abuse is better for our witness than hiding them.

So when we find ourselves in a position of privilege in the Church, this means listening with patience to the concerns of our brothers and sisters from the margins, even when their calls for change strike us, at first, as bitter or unwelcome.

When we find ourselves speaking from the margins, this means putting in extra effort to ensure that our challenges are issued respectfully and kindly, even when it seems exhausting and unfair to do so. And it means responding to shaming tactics (deliberate or inadvertent) by pressing on and continuing to speak the truth, even when it makes people uncomfortable.

For all of us, I think it means abandoning the notion that unity requires uniformity and that arguments, even heated ones, mean we don’t love one another.

We are, after all, brothers and sisters.

via On being ‘divisive’….| Rachel Held Evans

“But the fruit of the Spirit is love, joy, peace, patience, kindness, goodness, faithfulness, gentleness, self-control; against such things there is no law. And those who belong to Christ Jesus have crucified the flesh with its passions and desires.”

Because they probably aren’t self-righteous dingleheads. In my experience, as soon as you start thinking that you’re spiritually ace, you’re not. It’s an easy trap to fall into because we all have this inclination to worry about how faithful we appear to others, and as soon as we begin to pay more attention to keeping up appearances (which is easy) instead of keeping up our relationship with God (which isn’t so easy), we become like the Pharisees:

For they preach, but do not practice. They tie up heavy burdens, hard to bear, and lay them on people’s shoulders, but they themselves are not willing to move them with their finger. They do all their deeds to be seen by others.

Paul had some sound advice. To the Galatians he wrote:

Brothers and sisters, if anyone is caught in any transgression, you who are spiritual should restore him in a spirit of gentleness (but!) Keep watch on yourself, lest you too be tempted. Bear one another’s burdens, and so fulfill the law of Christ. For if anyone thinks he is something, when he is nothing, he deceives himself. But let each one test his own work, and then his reason to boast will be in himself alone and not in his neighbor. For each will have to bear his own load.

Don’t worry too much about your hand-me-down faith, the faith that has seen a lot of wear and tear and fret and worry. That kind of faith is strong, even when you are weak. When you stop worrying about your faith, when you want to take it out of its velvet-lined box and show it to guests, when you think ‘Hey, mine’s shinier than hers‘, that’s when you’ve got to worry.

I was unsure of how to go about this [preaching], and felt totally inadequate — I was scared to death, if you want the truth of it — and so nothing I said could have impressed you or anyone else. But the Message came through anyway. 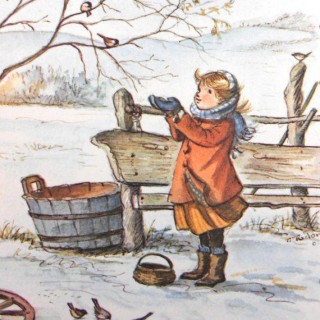 Local preacher and theology student. Reads, writes, travels in time. Emotionally invested in good characters and bad coffee. Theoretical knitter, and no less enthusiastic for it. Blogs primarily at Your Mess His Message, Funeral Fashion Sandwiches, and Truth Eats the Gun.